Advertise your business across the internet 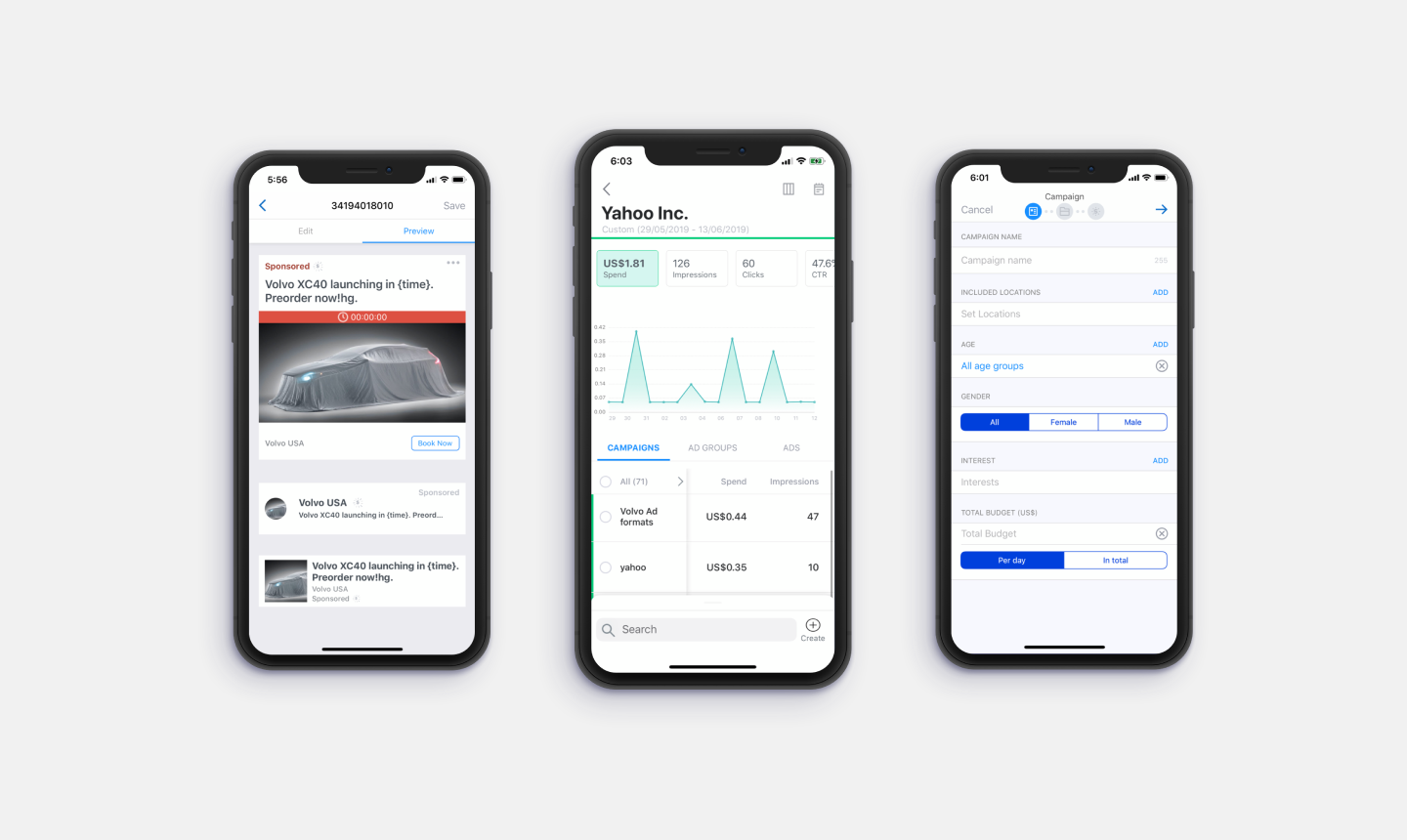 Provide account managers and advertisers with a way to manage ad campaigns and preview mobile ads from a mobile device.

Develop Verizon Media’s first version iOS app for managing ads published to their Ad Platform while on the go.

Verizon Media is the umbrella company for Yahoo, AOL, TechCrunch, and other media properties and they offer a single Ad Platform to advertise across all Verizon Media’s sites and apps. The Verizon Media Ad Platform is like Google AdWords for all Verizon Media web and mobile properties. Advertisers can publish and manage engaging video, native, and search ads next to premium brand-safe content on a single advertising platform while driving meaningful user acquisition results.

This massive growth in mobile app usage has made it hard for startups and large brands to acquire users. The Google Play Store today houses 2.7 million apps, and the Apple App Store comes in second with around 2.1 million apps. You need more than a well-designed, useful custom mobile app in this mad-competitive fight for relevance; you need a way to market your creation.

App install ads are an effective way of gaining downloads from app stores or boosting app store optimization (ASO). They help drive installs, which factor a lot into ASO best practices. App install campaigns are described as a “must” because you can’t assume your app is going to go viral or lead your category when you have so much competition. These ads appear on Verizon Media apps such as Yahoo mail, news, and search, redirecting users who click on your ad to your app in the Apple App Store or Google Play. App install campaigns push a large number of downloads in a short amount of time, which increases your app’s ranking in app stores, boosting organic traffic.

Verizon Media’s Ad Platform needed a way for marketers to preview mobile app install ads from their mobile devices, previewing exactly how their ad looks next to current content published across Verizon Media’s properties. They decided an iOS app with ad preview capabilities would help advertisers create better ads and optimize them to perform better over time.

CognitiveClouds was tasked with building a native iOS App and integrating it with Verizon Media’s advertising APIs. We utilized a Test Driven Development (TDD) process combined with Agile/Scrum methodology for the project to make the code clearer, simple, and virtually bug-free. Because the Verizon Media team used ‘Screwdriver’ to generate each build, a single test case failure or test coverage below 85% raised a red flag. Over the course of the project, our developers improved the test coverage of the app to ensure each daily release was able to be built by the stakeholders at Verizon Media.

By mocking the data, we made API response easy and achieved maximum code coverage by writing both UI and Unit test cases. For manual test cases, we ran “monkey testing,” hitting the app 10,000 times per second for 24 hours to find crashes and other points of failure. All issues and interactions were logged in Flurry, and our team worked through fixing the issues in the next sprint. By the time we shipped the production application, the cold time to boot the app was below 5 seconds.

One major challenge was creating charts and graphs with a look-and-feel similar to rich data visualization libraries with smooth interactions used by modern web applications. While there are a handful of open-source chart libraries for native mobile apps, it took time for our team to find the right library to cover Verizon Media’s use cases. We settled on PNCharts to create rich and insightful charts..

The app allows users to log in to an existing Verizon Media Ad Platform account and update or create ads based on campaign and AdGroup. Ad performance is tracked and displayed to the user via charts and tables. Users can stop, pause, and start ads at any time. A commonly requested feature is the ability to preview ads from a mobile device next to live media content, which was incorporated into the iOS app by our team.

The app is now used by more than 5,000 Verizon Media employees and advertising customers who use the app to optimize campaigns while on the go. People love the app because of its simplicity, and the ability to preview mobile ads on a mobile device has helped advertisers optimize ads and increase click-through rates.

Volkswagen
Advertise your business across the internet